[WARNING: the usual.  Consider yourself warned. You have only yourself to blame. And, if pressed, I will claim that none of this is true.] 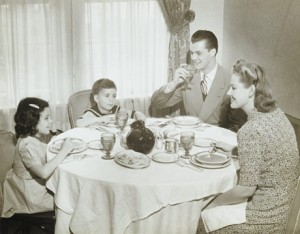 Surely, Ross is not going to trash the sacred Family Supper?

No. The inmates at  McMac Manor are habitual, almost daily, participants in that mythical ritual. Like the family itself, McMac family suppers are rarely pleasant and are frequently awful. However, it has never occurred to us to give up on the practice of gathering together for the evening meal – any more than it has occurred to us to give up on the “family” thing entirely. In the end, the only thing that signals serious family dysfunction  more than a fucking awful family supper is not having family supper at all. We may be losing, but we’re in the game.

Scientists have studied the family supper. To death. The results are good. Eating together as a family at least four times a week unleashes a shower of beneficial effects – lower risk of obesity, substance abuse and eating disorders. Increased chance of graduating from high school. Family suppering kids are less likely to get into fights or be promiscuous. They’re more well-mannered. They develop healthier eating habits. They feel like that have a more stable home environment.

Wistful websites describe the family dinner as an opportunity for conversation; family members sharing the day’s experiences, discussing current events; kids learning to communicate and to listen; parents making that essential connection with their children’s lives and passing on the value of their insight and experience. It is a rich, nurturing time, fostering familial bonds which will last a lifetime.

Perhaps this is the way family suppers work in the lab, where these families were studied by eager scientists searching for the magic secret of the successful family. Perhaps all those good things happen to family supper regulars who follow the prescribed suppering protocols. But, what about us? After a typical family supper, all I want to do is kill them, then myself, then do dishes. I’m not saying that we don’t  or won’t enjoy all the benefits the studies predict. I wouldn’t describe us as a family of fat, drunk, drug addicted, violent, promiscuous highschool dropouts with bad manners and poor nutritional habits – or, at the very least, I’d like to think it’s only part of the story. I’m assuming that some benefits will flow from our practice because all the misery and mayhem, violence and hate occurs at the dinner table every evening and we just don’t have the will or energy to get into any further trouble. And, I comfort myself by assuming that most families are like mine.

Like all parents, we care about our kids’ nutrition. Like most kids, our boys use that information to torment us.

Eventually, the kid is eating one pea at a time, claiming with each pea that he cannot eat even one more.

While the attention of two university educated adults is intensely focused on negotiating the one-at-a-time pea eating of a seven-year old, the middle boy has tossed his broccoli under the table and the youngest has wandered off.

Then, we move to rice or potatoes. Salad. Corn. Beef. Chicken.

And on into the night. The food cools and eventually becomes inedible. The struggle threatens all evening plans. It is a battle of mutually destructive wills. As always: lose-lose.

This version of the food fight ruined most days for many years. But it wasn’t the worst thing.

Sibling rivalry and other family “issues” are at their most intense around the supper table, when we wholesomely force mortal enemies to sit facing one another and place sharp implements in their hands. The supper table is a cage: only one can come out alive – at most.

Worst is when there is a sibling truce, so the three can unite to focus on the real enemy.

My non-ex wife and I erred in showing them that we care that they eat. We compounded that error by exposing them to our political, moral and religious views and by demonstrating through word and deed that we care about those things and take them seriously. The next time I have kids, I’m not letting them know that I care about anything. Kids have few opportunities to exercise real power. Fucking with one’s parents is a  source of power. Showing contempt for everything that parents value, while refusing to eat your vegetables? Is  there anything more satisfying?

I can remember as a child denying my mother the satisfaction of having a child with good table manners. That’s how rebellious I was – I put my elbows on the table, didn’t use a knife and fork properly, wiped my mouth with the back of my hand, chewed with my mouth open. And I laughed. I mocked her horror.

If only things were still that simple.

My kids swear at the table. Swear? Are you kidding? Why would they do that?

Because, we don’t want them to.

Our kids joyfully and profanely spew racism and misogyny, mock the poor and disabled, scorn the overweight and the unattractive.

They loudly express angry misanthropy. They side with the bully. They cheer the oppressors.

The books say “lead by example”. We do. That’s how they know which buttons to push.

But perhaps the worst is their urge to shock us with graphic sex talk. I’m sure this wasn’t happening in those studies of happy families launching themselves into successful lives by suppering together. Our boys are constantly accusing each other of participating in all manner of wild, sometimes violent sexual activity – consensually or otherwise. This grotesque nattering began when they were young, long before any of them likely had any idea about what they were describing in such detail. I blame the internet and the school system. Most of the sex acts they described were homosexual – I suppose because this had the double impact of playing on young boys’ insecure homophobia while also frustrating their parents’ efforts to foster a home environment, free of those kinds of phobias. And, once it gets started, it escalates and they work themselves into a gay-pornographic frenzy. At least we’re not fighting about eating peas anymore.

Their mother tries to break through the chaos by leaving the table dramatically – “storming” is how I’d describe it – but I sit there, waiting for things to die down so we can get to all that respectful discussion and sharing of the daily news, all that nurturing, bond-forging bullshit I’ve heard so goddamned much about. Good luck.

And I do mean it. We rarely go to the Dairy Queen.They know who’s boss.